In the last week allegations of bribe involving the Portuguese Prime Minister José Sócrates, have been all over the Portuguese media. The PM is supposedly involved in the Freeport scandal, and could have accepted bribes from a British building firm, to award the contract for the construction of the Freeport shopping complex. (read more)

Socrates is presently experiencing several significant astrological contacts, all of them related to this setback, which might jeopardise is political career. He was born on 6th September 1957 at 10:30 PM on Oporto, Portugal (source: hospital records): 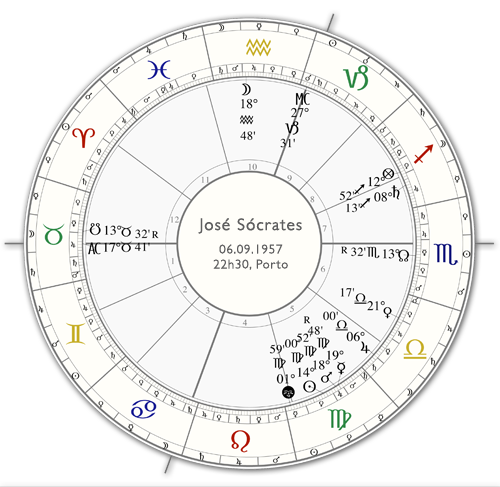 Let us start by the primary directions.
The directed MC is now opposing the Mercury-Mars conjunction, which suggests that his public image and career (MC) are greatly damaged.
The first planet opposed by the directed MC is Mars, which according to the Tradition represents:

“It denounces onto the native many evils, robberies, contentions, quarrels, restraint of liberty, many harms, which shall as well proceed from himself as from others; many times public death is threatened, or public accusations (…) it notes lost of offices, commands, etc. In kings or princes it notes danger of deposing, loss of their armies, tumults by their soldiers, mutinies, uproars (…) in times of peace it shows the oppression of kings, and the subjects vexed.” – William Lilly, Christian Astrology

In the PM’s natal chart Mars rules the 7th and 12th houses, both signifying enemies, confrontation and (to an extent) limitation.
Right after the opposition to Mars the directed MC opposes Mercury, which suggests:

“(…) unto the native a most difficult and ambiguous time, oppressed and tormented with and by mercurial man, witty and learned, who shall give occasion of trouble and distress onto the native, misinterpreting his actions with several by-reports (…) it involves the native in some ungodly desire, and occasions his loss of preferment; it raises many feigned and untrue reports against the native, much abused by letters and sinister informations, false witnesses and accounts, and unjust sentences, or partial dealing of judges (…)” – William Lilly, Christian Astrology

Mercury rules the 2nd and the 5th houses, thus the accusation against him relate to bribery money (2nd house) and intermediation (5th house) of a shady dealing.

But these are not the only planetary movements to trouble Socrates.
Saturn has been transiting in Virgo, trough his natal Mercury-Mars conjunction, and thus strongly activating the two directions mentioned above. As Saturn is a difficult planet, toil and trouble are to be expected. The problems signified by this planet originate from his public image (as Saturn rules the 10th house) and from foreign countries (as it also rules the 9th).
In his solar revolution for the present year Saturn is angular in the 1st house and conjunct the Sun, thus increasing the impact of the problem.

Although the problem has been developing for some time, it only reached the level of scandal by last Monday the 26th. On that day an eclipse occurred at 6º Aquarius, and almost simultaneously a Mercury-Mars conjunction at 23º Capricorn. As both events affect the PM’s MC and 10th house, they have triggered the ongoing direction and transit. Thus, the underlying innuendo and rumours suddenly emerged into the public domain, “eclipsing” what was left of his already low popularity.

Here we can see how three different types of predictive technique can combine and interact in a nativity. The primary directions define the quality of the event, the transit enhances its meanings, the solar revolution determines its impact, and the eclipse (together with the fast-moving transits) acts as a trigger for a specific event.

In the 9th of February, a lunar eclipse will fall on the natal Moon, placed in the 10th house. This should bring further developments to this case. However, as the eclipse is penumbral and thus very weak, the effects shouldn’t be too drastic. Let’s wait and see.