It was an innocent walk in the park. Luís and I were just trying to relax after a long and exhausting week. We were not expecting what happened next. As we were strolling along, something heavy and compact bumped into our legs. A small black dog, friendly and jumpy, just came out of nowhere and stood for a moment in front of us, smiling like dogs do, before going off running again after another dog. Cute, we thought, and we continued our walk. After a while we noticed that the dog was following us. The other dog had gone home, but this one had stayed. He is not really following us, we said to each other, he’s just going home, and it happens to be in this direction. Could be – but in the back of our minds we noticed that he had no collar. A few more steps and we reached the end of the park. Further ahead there were busy streets full of cars. We turned back to return home, hoping the dog would finally go his way. No – he kept following us, this time in the opposite direction. We stopped. He stopped in front of us, waiting. There was no doubt: he had adopted us.

We are both animal lovers, Luís and I, but truth be said, we are most definitely cat-persons. We have cats at home. Cats – not dogs.

So, there we were, the two of us and the black dog, in the middle of the park, on a Sunday afternoon. Now what do we do? A horary question, of course! Luís had his iPhone and there is an app for that! 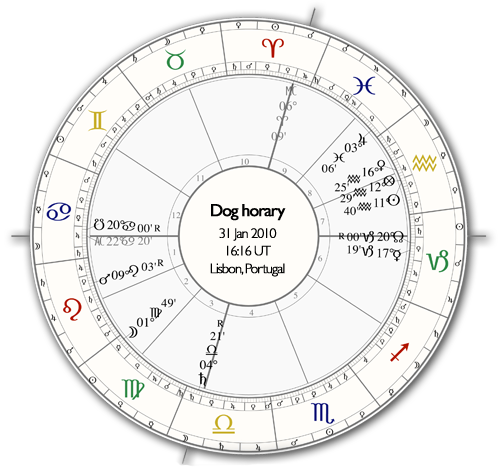 Quite surprisingly, the dog is represented by dignified Jupiter in Pisces; it is posited in the 8th house, which is the 3rd derived from the 6th (small animals). It was therefore in good conditions (dignified benefic) and possibly close to his home. We concluded that the dog was OK and that it would be just a matter of time before his owner would take him home. We walked around the park. We asked some people passing by. We waited for the dog to tire of us and go home. All in vain.

So, how could this be? How could the chart say one thing, and reality, another? Another quick look at the iPhone, just to confirm if the chart was radical – and it was: the ruler of the hour was the Moon, and the Ascendant was Cancer. Definitely, a valid chart – and still, so different from reality. How could this be? And then we finally realized: the dog was OK because he was with us! No owner was about to appear, we were the ones who were going to take care of him! In the chart, the Moon, ruler of the Ascendant (and therefore representing us) applies to the opposition of Jupiter (the dog). So, we were taking the dog in. It was an opposition because it was complicated for us, because of the cats. Another thing: Jupiter was in the 3rd not because the dog’s home was nearby, but because we live in the neighborhood.

So, it was not the Astrology that was wrong. It was our understanding of the chart that was incorrect.

Ok, then. The dog’s fate was up to us. We started to make phone calls to everyone we could think of, to get the dog a temporary home, while we found him a permanent home. A nice old lady passing by produced a piece of rope, and we manage to improvise a leash. We could not risk crossing a busy road with the dog without some kind of restraint. We took him to the vet (there is one open on Sundays near our home) and we confirmed that he had no chip implanted. Then we took him home (just into the hall, because of the cats), to give him water. And we waited for a miracle.

And the miracle came: Luís’ father has a friend who keeps his dogs in a private kennel. He accepted to lodge this one for a few days, just to give us time to get him a proper home. Halleluiah!

So off he went to the kennel. The dog didn’t wanted to stay there, and it broke our hearts to leave him in a box. We just had to do it, for his own good. He is now protected from cars, warm and well fed; and he has a future, something he would not have if he had stayed in the street – but we cannot explain this to him.

We are now publicising the case, trying to find it a home. Does anyone want a nice friendly dog?

And by the way: it is a bitch! 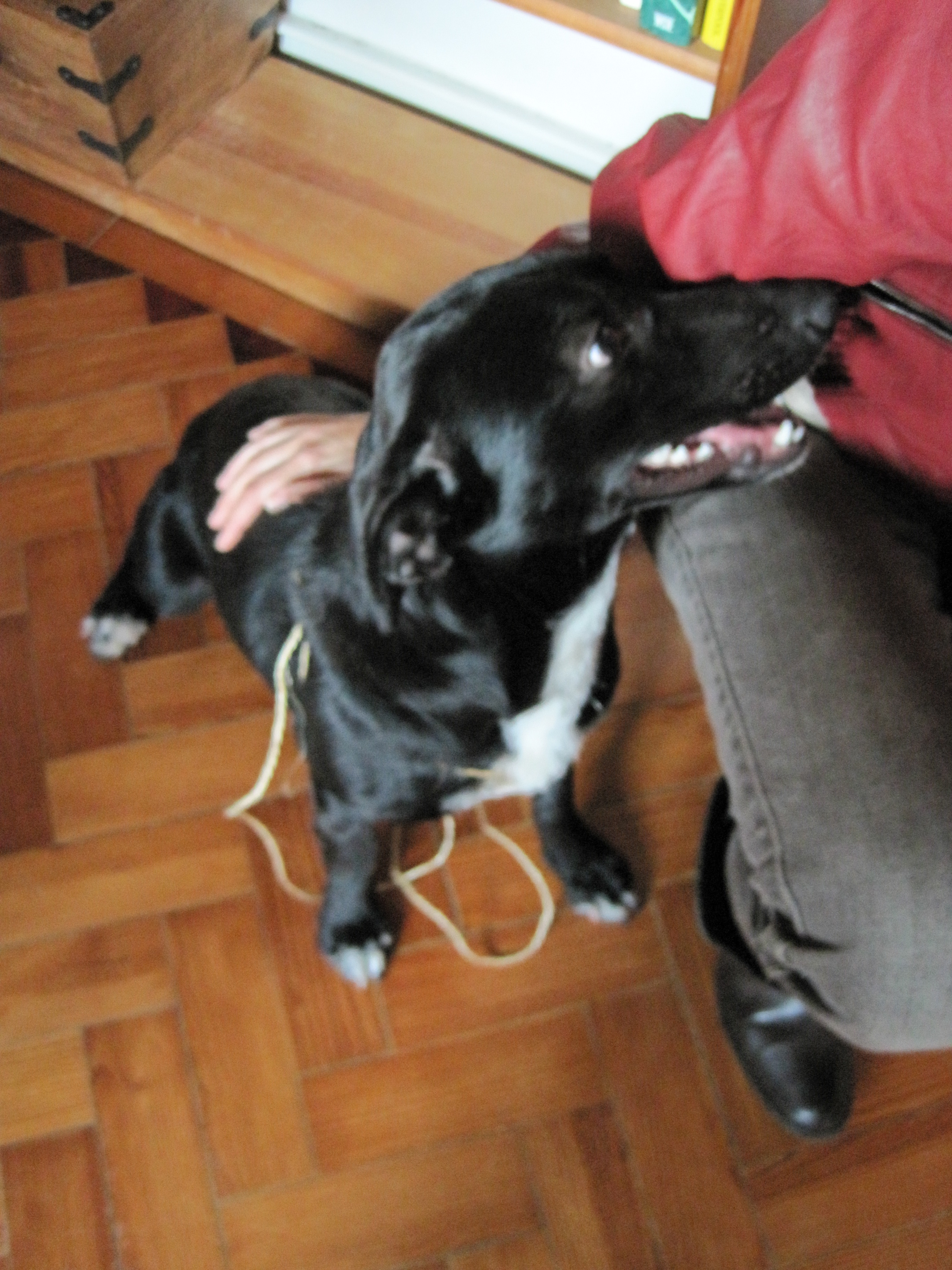 William Lilly’s nativity by himself

Sue Ward has just made available on her blog William Lilly's true nativity. This a…