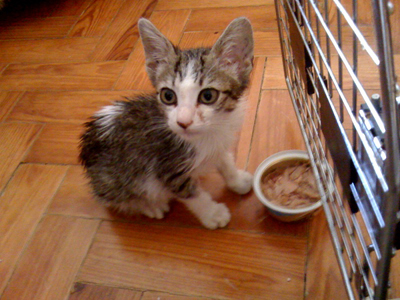 This is another cat story, one of a long stream of animals we have rescued throughout the years.

Some time ago I was working at the office, in our 3rd floor flat, and because the windows were wide open I could hear the neighbours talking in the backyard. I was only vaguely aware of their presence, because my focus was on work, but somehow one of the sentences captured my immediate and total attention: “the cat is going to die”.

My immediate reaction was to rush to the window and try to find out what that was about. I saw a man and two children in the backyard of the next building. The children, two girls of about 10 and 12 years old, seemed distressed, and the man, a builder, seemed totally indifferent to them. As he moved way to the farthest corner of the yard, I called the children and asked them what the problem was. The problem was, obviously, a cat – or more correctly – a kitten.

According to the girls, a stray kitten had “inexplicably” jumped into the sewage pit, which had being open for repairs (later I found out that the kitten was trying to escape the children’s unwanted attentions). The girls thought they could pull him out, but they soon found out it was impossible, as the hole was too deep and too narrow; the kitten could not climb out and the children could not reach to pull him out. As they had been warned not to disturb the kittens, they knew they would be chastised for their actions. So, their first reaction was to hide the fact and hope the kitten could miraculously escape, which of course did not happen.

After some time, the builder appeared and started to put back the final section of the drain and its cover – therefore, unknowingly, burying the kitten alive. By then, the girls were so distraught they were willing to risk a reprimand, as long as the kitten could be rescued. So they told the man what was happening, hoping he would help. But, shockingly, the man showed no compassion either for the animal or for the children. It seems he had warned the girls earlier that day not to chase the kittens, so he thought it was only logical (and, in fact, educational) that the cat should die a horrible death, just to prove his point! His reply to the children’s request, “the cat is going to die” was the sentence I had overheard.

As soon as I realized the gravity of the situation, I called Luis for help. During all this time he was at the computer, totally unaware of the situation, but it took only two words – “cat emergency” – to prompt him. We rushed to the neighbouring backyard with a transporter box, and we got there just in time: in that brief interval the builder had sealed the drain, and the kitten was now imprisoned inside the pit. Trying to remain calm, we asked him politely to remove the cover, but he replied he had to go, because he had finished work for the day. And so he did, totally indifferent to the fact that a living being was choking inside the pit.

We promptly removed the tube to allow some air and light into the drain, but the problem remained, as the hole was too small to allow rescue. Fortunately, Luís found an alternative: the main junction of the sewer was just a few centimetres away, and if we could remove the lid, perhaps the cat could be retrieved through the opening, which was considerably larger. It took great effort and co-ordination to remove it, as it was stuck fast, but Luís did it, and the sewer was finally open.

The kitten was at the bottom of the pit, facing the opening, in deep shock, and no longer reacting. It was a pitiful little thing, cold, wet and dirty. He didn’t try to escape, and didn’t even move when Luís reached in and grabbed him. We showed him to the children, who were extremely relieved, and hurried to bring him home. We cleaned him and tried to raise his body temperature, as hypothermia is an extremely serious (sometimes fatal) condition in a cat. He reacted eventually, but remained inert and somewhat vacant. By then we realized we had a previous commitment, an astrology class, and students should be arriving at any moment. So we left him in a warm room, with a bed, food, water, a litter box and an electric heater, and went to the class. Because so many of our students are animal lovers, we talked about the situation after the class, and asked them to help us find a good home for the kitten.

Back from the class, later that evening, we found the kitten a bit better, but still not reacting; he had not touched the food or used the litter box, in fact, he hand’t even moved from his previous position. We were not certain that he would recover from his horrifying experience.

So, we asked the question: How is the cat?
Here is the answer.

The chart is very clear: the cat is great! The Sun, ruler of the 6th house, has just entered Leo, therefore becoming dignified. The previous situation is also clearly represented: the Sun (kitten) is just separating from the South Node (diminishment, damage); so the kitten is just moving away from a potentially damaging situation. Furthermore, this Sun-Node conjunction was a solar eclipse, which occurred in the last degree of Cancer. This is very descriptive of the situation: the cat (Sun) has disappeared into a drain (eclipse in Cancer, a water sign). But right after that terrible event, the kitten enters a new and much better condition (represented by the sign of Leo, which it rules). The kitten was therefore very well, or it would be well soon.

This proved to be right, as the kitten fully recovered within a few days, and we found him a new home, a week later. He is now being properly cared for and loved, and we hope the terrible experience in the sewer will eventually fade from his memory.

William Lilly’s nativity by himself

Sue Ward has just made available on her blog William Lilly's true nativity. This a…