The gadget that all Apple fans are waiting for is coming soon!
The second generation iphone, with new and improved technology, will be launched on Friday the 11th.

To make an astrological study of this event we have to consider three moments. The first and most obvious is the announcement of the 2nd generation iphone, which is the first chart we’ll be studying. Because this is the 2nd version of the iPhone, it is also important to take a look at the chart of the first time the iPhone was ever introduced to the world (in 2007). And because it will only be available to the public in a few days, it is also relevant to observe the astrological configurations for that date.

The much expected iPhone 2.0 was announced in San Francisco, California, on the 9th June, at 10:06 AM. (Source: internet news with detailed timeline of Steve Job’s presentation)

A first look at the chart is quite alarming, as both malefics, Mars and Saturn, occupy the 1st house. Mars is conjunct the Ascendant and the South Node, and Saturn is afflicting the Moon, near the cusp of the 2nd house. Not good.
Furthermore, Mercury, the main significator of any communication device, is retrograde and combust. Indeed, not good.

Does this mean that the iphone 2.0 will be a flop? Not really.

Besides, the placement of Mars in the 1st house is not as malefic as one would expect. Its conjunction to the Ascendant confers to the announcement a bold and daring tone (which is reinforced by the strength of the Sun).
In addition, Mars rules the 9th house, of foreign countries, and one of the main topics of this event was the announcement of the worldwide launching of the iphone 2.0 (the 1st generation was only available in the USA).

The combustion of Mercury is not as bad as it seems. Mercury is in its own sign, Gemini, and thus essentially stong); this also makes Mercury the dispositor of the Sun, which ameliorates its combust state.
On the other hand, the Sun (which “subdues” Mercury) is the ruler of the Ascendant (Apple itself); this conjunction signifies that Apple (the Sun) is in full control of the gadget (Mercury).

All things considered, it is to be expected some degree of setbacks in the new version of the iphone; these are represented by Mercury retrograde, South Node on the Ascendant and Saturn afflicting the Moon. But even so it will have immense support and visibility.
We can therefore conclude that regardless of a few problems, the new iphone will not be a disappointment.

Let’s now take a look at the announcement of the 1st version of the iphone. It occurred at a particularly fortunate moment, 9th January 2007, at 09:43 AM, also in San Francisco. (Source: internet news with detailed timeline of Steve Job’s presentation) 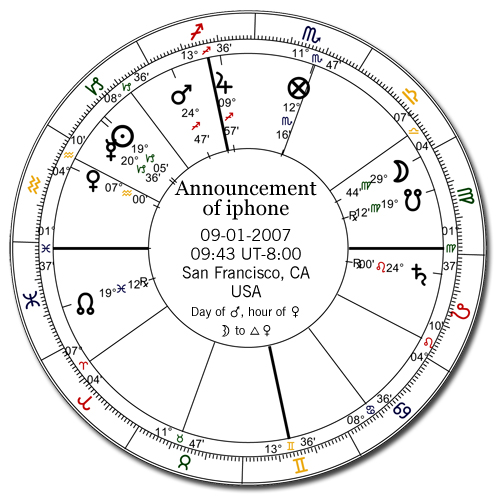 The chart presents early Pisces rising, with the powerful benefic star Fomalhaut closely conjoining the Ascendant, and the North Node also in the 1st house.
Jupiter, the ruler of the Ascendant, is strongly placed in its own sign and term (at 9º Sagittarius), closely conjunct to the MC.
Just by itself, this configuration points to tremendous success.

It is interesting to verify that this chart also carries a martial tone, as Mars is strongly placed in the 10th house and Jupiter (ruler of the Ascendant and the MC) is conjoining the martial star Antares, the heart of the scorpion. This shows great ambition and the stamina to achieve success.

As to the third moment to be considered, the new version of the iPhone will be made available to public on the 11th of July, just a few days from now.
It is impossible to erect a chart at this point, because it will be available at different times, around the world.
The first purchases will probably occur in Australia, New Zealand and Japan, the most eastern of 21 countries where the iPhone will be available. Because of time zone differences, the 11 of July starts “earlier” there. In Australia, New Zealand and Japan the configuration is more favourable, because Mercury is still in Gemini and the Moon is still in Libra, conjunct the benefic star Spica.
In Europe and the United States the configuration will be less favourable, because of time zone differences. The Moon will already be in Scorpio and Mercury in Cancer, therefore weaker and a bit “muddy”, and so less suitable for this kind of event.
Luckily or all of us, the first, more agreeable, configurations should prevail.

It is just a pity that Apple has chosen the exact day of the Mars-Saturn conjunction for this launching.