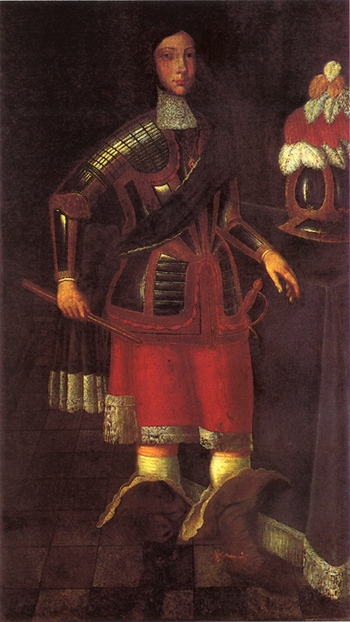 Prince Dom Theodosio is a very interesting figure from 17th century Portugal. He was the first born son of King João IV and heir to the Portuguese throne.

In 1640 his father, King João IV, restored Portugal’s independence following 80 years of Spanish occupation. Being the rightful heir to the throne, and with the continuing threat of reintegration with Spain, Dom Teodosio’s role in the succession was of the greatest importance for Portugal. All hopes of maintaining independence from Spain were upon the seven year old prince. He was carefully prepared to succeed his father and he seemed to measure up to those expectations perfectly. He grew up to be a cultured young man, with great intellectual curiosity and with very definite political and religious opinions.

Interestingly enough, he had a keen interest in Astrology and he is said to have had a collection of charts of his family, and to have made predictions on several political subjects, including the fall and restoration of the British monarchy. It is also mentioned that he wrote a short astrological essay, but unfortunately these manuscripts have yet to be found. He also received regular astrological reports from the most prominent astrologers of that time. His astrological and metaphysical interests were actively encouraged by his tutor, the Jesuit priest António Vieira (see previous post), himself a student of Astrology.

When Dom Theodosio fell seriously ill and subsequently died at the early age of 19, it was a great shock not only to his family, but to the nation at large. With the country’s independence still under threat by the Spanish, an uninterrupted succession was vital. This succession was guaranteed first by Theodosio’s middle brother, Alfonso, who, it became clear, was unsuitable because of physical and mental handicaps, and then later by the younger brother, Pedro. (A curious fact: his sister, Catarina, of Braganza, married King Charles II of England). 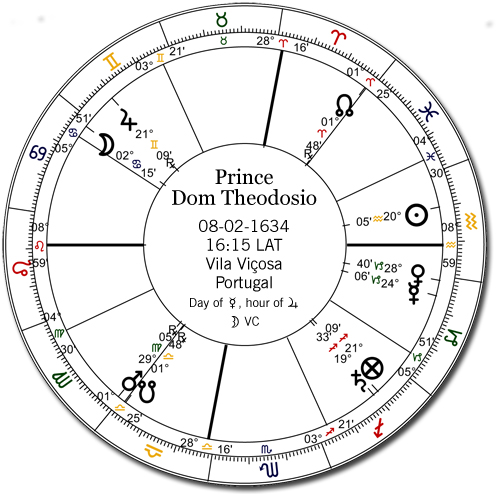 His chart is very descriptive of his life and his passions: his active pursuit for knowledge is clearly indicated by the mutual reception by exaltation, that is of Mars in Virgo and Mercury in Capricorn. This combina-tion produced a sharp mind, very focused and practical in his studies. The conjunction of Venus to Mercury adds the artistic giving him a love for music (which he also inherited from his father).

The main dispositors of Theodosio’s mind are Mars and Jupiter, an enthusiastic but difficult combination, particular when they are in square. It signifies boldness, courage and idealism, but the debilitated state of Jupiter can also signify excessive enthusiasm for one’s ideals. Jupiter is further afflicted by the opposition of Saturn which added the strict and hard religious discipline the prince was so fond of. Religion forms a large part his life because not only is Jupiter the natural significator of religion, but it also disposits the Part of Spirit and the Part of Faith (both posited in Pisces). As Jupiter is in its house of joy and is the almutem of the nativity, its place in Theodosio’s life cannot be overstated and, in fact, proved fatal because Jupiter also rules the 8th House.

The prince was well intentioned and stayed true to his beliefs, which we can deduce from Jupiter being in its joy, Venus being conjunct Mercury and the North Node being in the 9th House. But, although a benefic by nature, Jupiter is intemperate in this nativity because it is afflicted by Mars and Saturn which led to excessive and unbalanced expression. It is mentioned quite emphatically in the chronicles, and in his biography, that his tutors and educators frequently warned him of the dangers of his excessive devotions. Historians and biographers, too, refer to the severity of Theodosio’s religious activities which included regular fasting and mortifications, which contributed to his poor health and ultimately to his early death due to lung and stomach problems.

A combined study of the firdaria, profections, directions and solar revolution shows this event very clearly. By the time of his death, May 15th 1653, the directed Ascendant was at 24º of Leo, conjunct Regulus, a star of the nature of Mars and Jupiter. This not only portends honours, which indeed the prince was receiving at that time, but also can imply a choleric disease. This is further emphasised with the entrance of the Ascendant into the terms of Mars, a choleric planet.
Note that in that year’s return, Mars is in opposition with the natal Part of Sickness and in conjunction with the same Part in the return.

The profected Ascendant was at 16º Pisces, right in the middle of his natal 8th house of death, applying by square to natal Saturn, ruler of the 6th House of illness. This overall debilitated condition is further emphasised by the firdar of Mercury, which is a 6th House planet in the natal chart. In the return Mercury is in the 12th House conjunct to Jupiter and afflicted by the opposition of Saturn.

Notably, the solar return is also a lunar return, as the Moon is in exactly the same degree as in the natal chart. The Moon rules the natal 12th House of impediments and the return’s 6th House of illness. In the return the Moon is placed in the 5th house, which rules the stomach, and in the sign of Cancer which also signifies that area of the body. Indeed the prince died of a stomach disease and lung problems (also Cancer).

A touch of Mundane…

Being a prince and therefore having his life inextricably linked to the nation’s fate, his death is also shown in mundane charts; the partial solar eclipse of 8th April 1652 is a good example of this. In Lisbon, Portugal’s capital, the eclipse was at its maximum apparent obscurity (88%) at around 9:24 am.

The eclipse degree is afflicted by a square of Saturn from the 2nd House. Not only is Saturn ruler of the radical 8th, but is also placed in the 2nd House which is also the 5th derived from the 10th, that is, the king’s son.

Traditionally an eclipse in the 2nd face of Aries is referred to as bringing “some King, Prince or eminent officer to Prison or restraint of Liberty, it adds sorrow and danger of Death unto him”: a very accurate description of Theodosio’s eminent death.