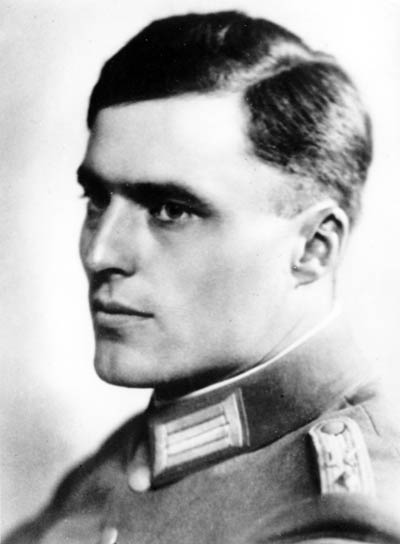 The Hollywood mega-production Valkyrie called the public’s attention to the failed attempt of 20th of July 1944 to assassinate Adolf Hitler, and to one of its protagonists, Count Claus Stauffenberg.

The attempt was meant to trigger Operation Valkyrie, an emergency plan approved by Hitler and intended to come into force in the event of the Fuehrer´s death or physical incapacity. This plot was the last of a series of attempts of the German Resistance to overthrow the Nazi regime. Its uncovering, and the subsequent execution of thousands of suspects, ultimately destroyed the resistance movement in Germany. (learn more)

Although Stauffenberg had no previous personal contact with Hitler, his military rank and functions granted him direct access to the Fuehrer, as well as first-hand knowledge of all his schedules and itineraries; thus he became a key element in the plot. 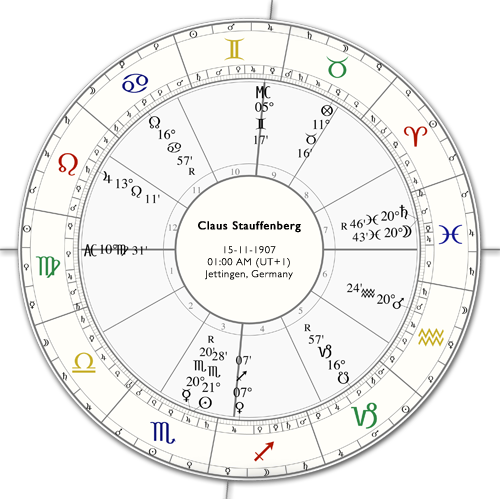 Claus Stauffenberg’s chart has a predominantly Melancholic temperament, which is prone to solitude and caution, rigorous, spartan in his habits, and a bit withdrawn. These traits are further stressed by the Moon-Saturn conjunction which emphasises and distempers the Melancholic temperament by adding to it a depressive tone. He also has some Choleric traits, which confer on him energetic and imposing qualities; these are also distempered by the two Choleric afflictions of the lord of the Ascendant: the combustion and the square of Mars.

The Melancholic-Choleric combination enhances the dry quality of the temperament (1), thus conferring strong will and a distinct trace of harshness, which is further intensified by the distempered conditions of Mercury (combustion and square to Mars) and the Moon (conjunct to Saturn), often turning into an oscillating behaviour, alternating between periods of solitary introversion and sudden outbursts of impatience (2).

His significator of mentality is Mars, which is in Aquarius, denoting a stubborn mind, determined to have things its own way and at its own pace, not easy to persuade and prone to arguing (due to the square to Mercury). Venus participates with Mars and because it is angular and aspects    the Ascendant, it adds a more polite and agreeable demeanour.

He had a difficult temper, but in social situations he was able to control it, enhancing his better side and deflecting the more aggressive traits of his nature to his military career. He was very determined (due to the emphasis of the Dry quality) and persistent, able to go to extremes to accomplish what he thought to be correct.

His military vocation is shown by the exact square of Mercury, the main significator of vocation, to Mars, its dispositor; note that Mercury rules both the Ascendant and the MC and Mars is in its house of joy. They are therefore strong significators of military vocation. This is further enhanced by the conjunction of Aldebaran, a star of the nature of Mars, to the MC.

In this chart there are clear indications of violent death:

– the main significators related to death in this chart are placed in violent signs (4): Mercury is in Scorpio, Mars in Aquarius and the 8th house cusp in Aries;

– both luminaries are afflicted by the malefics: the Sun (which is also in Scorpio) has a square to Mars and the Moon is conjunct to Saturn, also suggesting active enemies and possible violence.

– the ruler of the Ascendant is combust and retrograde, and the Sun, which combusts (subdues, obliterates) Mercury, is the ruler of the 12th house, thus bringing into play some hidden or uncontrollable factors (12th house) into his life;

– Mercury squares Jupiter, the ruler of the 7th house of enemies (posited in Leo, a feral sign, in the 12th of secrets and limitations);

– the Moon-Saturn partile conjunction in Pisces, a strong significator for enemies and opposition.

Let us now see how these configurations where activated by the time of plot. We will use Primary Directions, Profections and his Solar Return of 1943, which was still active by the time of the bomb attempt, 20th July 1944.

Stauffenberg’s directed Ascendant was at 9º Libra, conjoining the antiscium of his natal Moon-Saturn conjunction in the 7th house (5). This configuration is a ‘red flag’ by itself, as it activates the potential for strong opposors signified by the natal Moon-Saturn conjunction. The Moon is also quite probably the hyleg of this chart, thus having determination over life. Additionally, he was in a planetary period (firdaria) ruled by Mars and the Moon, which due to the significations of these planets in this chart, also reinforces the possibilities of life-threatening situations.

As if these testimonies were not worrying enough, the solar revolution chart presents striking signs of danger. 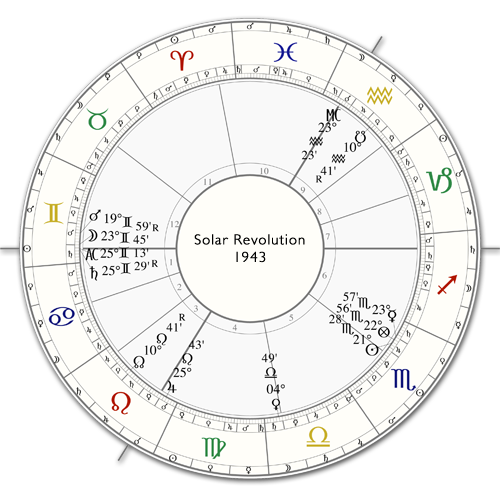 In the revolution chart we find the Moon, Mars and Saturn conjunct the Ascendant – a configuration which speaks for itself. The Moon and Saturn are significators of enemies in his natal chart, and are activated by the directed Ascendant; furthermore, Saturn is the ruler of the 8th in the revolution chart. As to Mars (6), it is the natal ruler of the natal 8th house. It is therefore a clear configuration of grave and immediate danger, with the possibility of death. The Ascendant and the planets are in Gemini, which in the natal chart corresponds to the 10th house of public image, which emphasises the visibility of the event. Therefore some dangerous (Mars) enemies (Moon-Saturn in the natal 7th) which would come to him in this period (conjunct the Ascendant in the revolution).

(1) As the Melancholic is Cold and Dry, and the Choleric, Hot and Dry.

(2) For a complete calculation on the Temperament refer to Luís Ribeiro’s article “Judging Temperament: a study of the method”, published in The Tradition journal, 1st and 2nd issues (Autumn 08).

(4) The violent signs are: Aries, Scorpio, Capricorn, Aquarius and Libra, according to William Lilly, C.A. page 644. For the complete delineation for violent death refer to C.A. page 644, chapter CLVI (of death, whether violent or natural).

(5) This event helped the rectification of this chart; the original time given by Astrodatabank from the birth certificate was 01:00 AM, which corresponds to 10º32’ Virgo rising; the chart was rectified in 6 minutes, which changes the Ascendant into 11º38’ Virgo rising.

(6) To be precise: Mars is in the 12th house, as it does not comply to the 5 degree rule, but its orb still reaches the Ascendant and it is conjunct the Moon and Saturn, which are conjunct to the Ascendant.