Since we are talking about animals in The Tradition web log, it seemed appropriate to evoke the life and work of Anna Kingsford, one of the most prominent, and yet relatively unknown, British women of the 19th century. 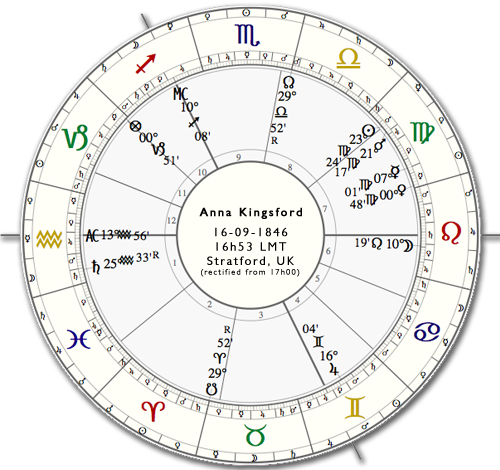 In her natal chart Saturn, the ruler of the Ascendant, is strongly placed in Aquarius (a fixed sign) in the 1st first house, clearly describing her strong will and firm sense of individuality. But the harsh, saturnine traits of her personality were somewhat softened by her sanguine temperament, which conferred her sociability and versatility.

While conducting a busy practice as a physician, she could still find the time to pursue many other activities in the areas of spiritualism, literature and charity. She was a writer, a feminist, a lecturer, a spiritualist and – above all – a devoted supporter of animal rights.
Her 9th house of beliefs and religion starts in Scorpio, a fixed watery sign, which associates stubbornness and emotional intensity to these matters. The 9th house ruler, Mars, is combust and therefore distempered by the Sun; this configuration adds impatience, boldness and excessive zeal to her beliefs, sometimes to the point of obsession. In fact, she could go to extremes, devoting all her time and energy to what she believed it was right.

In order to continue the animal rights and anti-vivissection campaign from a position of authority, she decided to study Medicine in Paris. She left for France with the blessing of her husband, but at the university she was confronted with aggressive rejection from some of her teachers, who could not accept a female student.
At the university she witnessed some horrific situations of cruelty against animals in the vivisection laboratories, and these visions would haunt her for the rest of her life. Again, the Sun-Mars conjunction can be linked to this ‘haunting’, as it is placed very close to the cusp of the 8th house, of fears and death.

In spite of all the odds, she managed to obtain her degree in Medicine – and she achieved it without ever performing a single experiment in animals, something unheard of at that time. Her final thesis, later turned into a book, endorsed the benefits of vegetarianism.

She was also active in the spiritualist movement in England, and became president of the Theosophical Society in 1883. Most of her works in this field are now available in digital format.

At heart Anna Kingsford was a writer and a communicator as Mercury, dignified and angular, stands as her main vocational significator. The participation of Venus, which is conjunct to Mercury and in mutual reception with it by term, makes her also a poet and a storyteller. She started writing poetry and stories at a very early age, published countless articles in the field of medicine (especially about vegetarian nutrition) and was for a brief period director of an avant-garde magazine.

Throughout her life she suffered from poor health, and her passionate campaigning efforts in favour of her causes ultimately contributed to her premature death at the age of 42.
In 1886 she travelled to Paris to visit Louis Pasteur, a well-know vivisectionist, trying to collect evidences of cruelty towards the animals in his laboratory, in order to publicly expose him. In November 17th, while waiting in front of Pasteur’s laboratory, she was caught in heavy rain; she stood there for several hours, her clothes soaked and exposed to cold wind. Her already fragile health suffered terribly because of this episode: what could be a simple cold developed into pneumonia and later into consumption. She never recovered, and died 15 months later, on 22nd February 1888.